Money is important without a doubt, but everything is relative. I happened to like the era in which I played. I liked the close knit family atmosphere of the Detroit Lions. There were only 33 players then and we felt like a family, from the front office down. That aspect of the game has changed and I’m not sure I like it.” 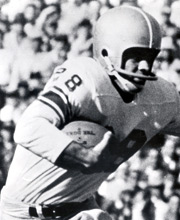 Detroit Lions fans recall Yale Lary in many different ways. Some remember him as a superb right safety, a key cog in Detroit's fearsome defensive platoon in the 1950s and 1960s. Others will tell you he was one of history's truly great punters. Still others say it was his breakaway ability on punt returns that set him apart from all the rest.

In reality, each assessment is correct because the multi-talented Texas A&M product did all of those things superbly well during his 11 years with the Lions. There is no question that Yale's defensive play was exceptional. A fixture at right safety throughout his career, he was named to the All-NFL team five times and played in nine Pro Bowls. His career mark showed 50 interceptions and he might well have had many more had not opposition quarterbacks avoided throwing in his area.

Still those who remember Lary as a superb punter have plenty of reason to do so. His career average of 44.3 yards on 503 punts places him among the best ever. He won three NFL punting titles and missed a fourth by a razor-thin margin. "Kicking from the end zone, Yale invariably put the ball across midfield with enough hang time to let us cover the kick," team captain and Hall of Fame linebacker Joe Schmidt recalled. "He made our defense look good because he always gave us room to work."

While Lary's outstanding exploits might be remembered in different ways, all who saw him play undoubtedly would agree that he was a rare find, the kind that comes along only once in a generation. Comparatively small at 5-11 and 185 pounds but armed with a big heart and great ability, he did much to make the Lions a championship team. 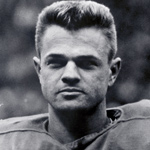 Honored guests and ladies and gentlemen, during the 1950's the Detroit Lions had some great football teams. We won the championship three times and the division championship once. If I had to pick one player on those great teams, for his contributions, it would have to be Yale Lary. Yale as a defensive halfback to me was great. Yale had great speed, he was quick, he had intenseness and he had intelligence. And during his defensive play for me at Detroit, Yale intercepted during his career a total of 50 passes and I am sure it would have been more like 100 but the opposing quarterbacks had a habit of throwing away from his territory when there was a man-to-man or a zone. But besides his defensive ability with the Detroit Lions, he is recognized as one of the all-time great kickers in the game of football. He averaged 503 punts, he averaged 44.3 yards. He had a one season average of 44.9 which is the second time high next to Sammy Baugh which is really great.

Besides his kicking ability and his defensive ability, he was also dangerous on fourth down and kicking situations. In his career he averaged over 15 yards for carries and punt formations. Yale was picked on all NFL teams on 4 times. He played in 9 pro bowl games and besides of all of these little things he ran back punts and kickoffs and during his career with Detroit it was one of the dangerous punt return kick-off men in football. It is certainly a great pleasure for me to be here to present to you for induction into the Pro Football Hall of Fame, Yale Larry. Yale was a great player on the field, but he is a fine gentleman off.

Thank you very much Buster, I certainly appreciate that. You know I have known Buster for 27 years and it had to be an occasion like this to say something nice about me. But I've also respected Buster also as being a gentleman and fine coach and Buster I want to thank you for all the great years period Buster was always fair with me, I look back I know there was several games that I shouldn't have been in there I should have been on the bench, but Buster left me in there- he knew I needed experience and he gave it to me. Thank you, Buster.

Football has been such a major part of my life that being here today is literally a dream come true. I remember playing football even in elementary school junior high school, high school, on to Texas A&M, and I was fortunate enough to be drafted by the Detroit Lions in 1952 where upon going to training camp I was fortunate to run into some veterans up. there that were fellow Texans themselves great ball players like Bobby Laynei Doak Walker, Cloyce Box. Even the head coach, Buddy Parker, he was a Texan. I didn't know if this would help make the team any, but I know it wouldn't hurt me.

The fond memories I had at Detroit; I will remember forever. The Detroit and the great Detroit fans, the Detroit Lions and the Detroit Organization and especially back in the 1950s, Edwin J. Anderson and Nick Kerbaway and also the early 60's headed by William Clay Ford. Great coaches Buddy Parker, our head coach. We won the world's championship in 1952 and 1953 and also George Wilson in 1957. I have been very fortunate in many respects, especially I have been more fortunate in having a wonderful family. My son, Yale Jr. and my daughter Nancy Jane and the best cheerleader a guy could ever have, someone who really cheered me when I needed it and had more faith in me than anybody, my wife, Jane.

I want to thank all my friends that came from long distances from the Detroit area, my friends that came from Ft. Worth, Texas and all over, my family who came here to share this with me. Also, I would like the National Football League and the NFL Hall of Fame and the many, many that are responsible for this great event today. This is a moment that I will cherish and remember for the rest of my life. Thank you very much.