The Cincinnati Bengals joined the American Football League as an expansion team in 1968.  By 1970, under the direction and guidance of the legendary Paul Brown, the Bengals won the AFC Central Division to become the first expansion team to win a championship of any kind in just three years.  In 1981, sporting a new look, Cincinnati advanced to its first of two appearances in the Super Bowl. 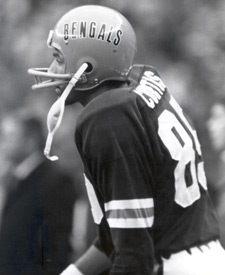 The Bengals have had many great moments, players, and coaches over the year.

One such star was wide receiver Isaac Curtis who held the team record for career receiving yards for many years. He amassed 7,101 yards during his career with Cincinnati from 1973 to 1984.

More on the Bengals Hall of Fame>>>