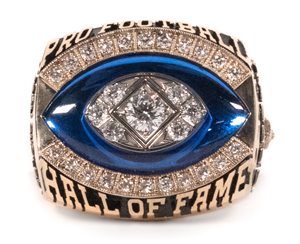 During the “Thursday Night Football” matchup between the Tennessee Titans and the Green Bay Packers, Butler will receive his Ring of Excellence. Hall of Fame President Jim Porter will be on hand at Lambeau Field for the ceremony. The game is set to kick off at 8:15 p.m. ET.

All three representations of membership in sports’ most exclusive club will be displayed during the special presentation for Packers fans to pay tribute to Butler.

The outer diamonds create a “stadium” effect surrounding the football-shaped diamond center. The vibrant blue gemstone was selected both for appearance and meaning, as blue is often associated with confidence, power and integrity – all traits of these incredible, legendary football icons.

Butler’s Hall of Fame Ring of Excellence is customized to reflect his unique career. A likeness of his Bronzed Bust, along with “Safety” and “1990-2001” (his years in the NFL), appear on one side, while “Butler,” the Pro Football Hall of Fame logo and “Class of 2022” are included on the other.

Additionally, a special arbormark (or engraving) appears on the inside of the ring – 357 – which is his Enshrinee number.

To help look ahead to Week 11 of the NFL schedule, joining "The Mission" is Green Bay Packers Legend LeRoy Butler, a member of the Hall of Fame’s Class of 2022.