"There is only one way to play this game and that is as hard and as tough as you can.” 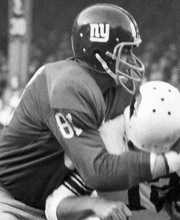 The Los Angeles Rams drafted Andy Robustelli, an end from tiny Arnold College, in the nineteenth round of the 1951 National Football League Draft. A long shot to make the team as an offensive end since the Rams already had such stars as Tom Fears and Elroy “Crazylegs” Hirsch, Robustelli responded in the only way he knew how – to go all out to make good at what was available to him, the defensive unit.

History will record that Andy became one of the finest defensive ends in pro football history, playing five years with the Rams and then nine years with the New York Giants. He was a regular for the Rams’ 1951 championship team, and the one game he missed that season was the only one he missed in 14 NFL seasons.

After five outstanding seasons in Los Angeles, the Rams dealt him to the Giants for a first-round draft pick. Andy performed even better in New York, and is credited with molding together the 1956 Giants team that won the NFL championship.

A natural leader as well as an outstanding player, Robustelli was a big factor in the Giants on-field success. He stayed with the New York team for nine seasons, the last three as a player-coach. Robustelli was not big for a modern-day defensive end, weighing only 230 pounds, but was clearly one of the finest pass rushers the game has seen.

He was named All-Pro seven times and was named to the Pro Bowl seven times. In 1962 the Maxwell Club selected Robustelli as the NFL’s outstanding player, an honor that up until then was generally reserved for an offensive player. The honor was indicative of the high regard that fans, teammates and opponents all held for the future Hall of Fame defensive end.

1951 NFL – Los Angeles Rams 24, Cleveland Browns 17
Robustelli did not start but played at defensive end for the Rams. Statistics not available

1956 NFL – New York Giants 47, Chicago Bears 7
Robustelli started at defensive end for the Giants and he recovered a fumble.

1958 NFL – Baltimore Colts 23, New York Giants 17 (overtime)
Robustelli started at defensive end for the Giants in NFL’s first overtime playoff game. He was credited with a tackle on the quarterback for an 11-yard loss

1962 NFL – Green Bay Packers 16, New York Giants 7
Robustelli started at right defensive end for the Giants. He was credited with two tackles and one quarterback hurry.

1963 NFL – Chicago Bears 14, New York Giants 10
Robustelli started at right defensive end for the Giants. He was credited with three tackles which included a tackle of the quarterback for a 9-yard loss.

(at time of his retirement following 1964 season)

Transactions: July 28, 1956 – Robustelli was traded from the Los Angeles Rams to the New York Giants in exchange for 1st round draft pick in 1957 (Del Shofner, B, Baylor, 11th overall)

There are many who may think it strange that the commissioner of professional basketball would have apart as a participant in this very meaningful Professional Football Hall of Fame award ceremonies. The truth of the matter is, that long before I became a basketball buff, I was a football buff. And through the years, I've lived a vicarious life as a professional football player by my friendship with many players in the National Football League, including of course, Andy Robustelli, my longtime friend from Stanford, Conn.

In the statistical sense, all of you know, of course, of Andy's unusual role as a great player in the National Football League. His 14 years of play, his Seven appearances in NFL Championship Games, nine times an All-Star, achieving an NFL career record for recovering 22 opponents’ fumbles. Being the architect of the great defensive team of the New York Giants which he captained and coached for several years during a time when that club and other clubs with great defensive units, made defensive knowledgeable to the football fan and Brian a new note of respectability to all of those who played defensive football. But that was when he was a player. During those years, but particularly since that time, in my opinion, Andy Robustelli has optimized what all of us look for it in our sports heroes once they've retired from active participation in the game.

He's been a very fine citizen and a community that pays respect to its fine citizens and in running a business, he has brought a new sense of responsibility to all of those in his community. He has a deep sense of family pride, he idolizes his nine children, he has a deep sense of religious responsibility to the point where he is called with affection by his friends, the “Pope”. The mayor of Stamford, the Governor of the state, and the president of the United States have in the past several years, have had occasion to appoint him to meaningful commissions or committees, all of which were for the betterment of the community, the state and the country.

I think if sports mean anything and if It has any meaning for the sports fans who congregate each year to look upon their sports heroes as human beings. Andy Robustelli optimizes all of the things we look for in our sports heroes, and today, not only as his friend, but as a football spectator, a football over for many, many years, it's one of the greatest thrills of my sports career to participate in this wonderful ceremony. Today, riding with him in the colorful parade throughout the city, both of us were touched as we never have been touched before in our sports careers, to see the eager faces, the knowledgeable recognition and the wonderful human response from all of those thousands of people along this route. Canton has truly taken its Hall of Fame to its heart and has made all of those who are honored doubly and rich because of their participation in it. And, hi there for today, live one more step in my vicarious participation in professional football, an honor to do so, an honor to present to you, Andy Robustelli to join the Pro Football Hall of Fame.

Thank you, Mr. Kennedy. Citizens of Canton, guess, my fellow recipients, ladies and gentlemen, and my family. This is a long way from that little kid that used to love to go to store for his mother, because when she needed Italian bread, it looked like a football, and he could take it and toss it up into the air and then run from the store to his home yelling, “Robustelli’s on the 50, he's on the 40, he's on the 30, and when he got down to the gold line, he'd be home”. well, it was a long way from the offensive days of a little kid to the defensive days of today, and as I look upon this place at the Hall of Fame, I try to be very realistic because I think that in life one learns to become realistic when it uses the tools that have been available to him.

In my life, football husband a tremendous tool. Looking at my life, I know that no one does anything alone. There's a great family, a wife, hardworking parents, and a lot of good defensive people. I look at the days and I think about the days that I look at all those films and like our society, I think I was looking for what is right, And I hope that these young kids today that participate in sports are looking for what is right, because until you can look at yourself as an athlete on film or wherever and say, “yes, it's me, it's my fault, I was a little lazy, I wasn't dedicated, I expected my teammates to do what I was supposed to do, or a took the easy route, I really didn't try,” and until we as athletes can look at ourselves and admit failure, when do we start to grow.

And as I look at our country, some people say we are divided, well maybe this is the start ladies and gentlemen, because in being divided you know where to start. So, as we do in sports let's look at ourselves and let's start to pull all of the pieces together like so many men that are here have done over the years in their Pro Football lives. They've taken failures and make them successes. So, I accept the place in the Hall of Fame probably for all of the failures we had in Pro Football, but more than that, I take it for the success that Pro Football has given to this country, hopefully for these young kids, and also for all the great defensive players that have made this tremendous game and certainly a big part of my life. I thank you very much.