"We didn’t have enough players for someone to be taking a vacation in mid-season…everyone who played back then showed up for every game. If you got hurt too bad to play, you retired.” 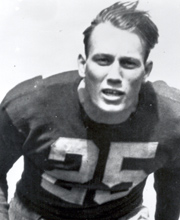 Today it is unlikely that a pro football lineman named "Bruiser" would weigh a mere 195 pounds. However, in 1938, when Hall of Fame tackle Frank “Bruiser” Kinard began his pro career, that’s exactly how much he weighed. Even in his final season, and still playing the big man's position of tackle, he tipped the scales at just 216 pounds. But his play was as his name implies – bruising.

Kinard earned a host of accolades during the nine years he played pro football, including All-NFL recognition from 1938 through 1944 as a member of the Brooklyn Dodgers/Tigers team. In 1946, after a one-year hiatus due to military service, Bruiser returned to pro football as a member of the New York Yankees of the newly formed All-America Football Conference. That same year, he became the first pro football player to earn All-League honors in both leagues.

Kinard was a two-time All-America at the University of Mississippi when he was drafted in the third round by the Dodgers in 1938. It was a year abounding with outstanding rookies but only two, Kinard and Byron "Whizzer' White, made the All-NFL team. Kinard had a burning desire to play and he played for keeps.

He had outstanding speed for a tackle and his admirers, of whom there were many, insist that he would have been outstanding at any position. On offensive plays, and particularly the Dodgers’ patented “shovel pass,” Kinard was the key blocker. On defense, he was a crushing tackler.

The Bruiser was tough and durable even in the rough-and-tumble competition of pro football. He rarely needed a rest and near-60-minute performances were the rule, rather than the exception. He missed just one game due to injury and, even then, it was doctor's orders, not a lack of willingness to play that kept Bruiser on the sideline. 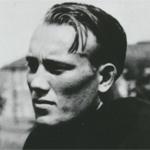 Drafted: 3rd round (18th player overall) in 1938 by Brooklyn Dodgers

Jim, Governor Gilligan, Mr. Mayor, Mr. Commissioner, Hall of Famers and their families, Enshrinees, ladies and gentlemen. It's a great personal honor and joy to me to be here in Canton today to witness the enshrinement of one of both college and professional football all-time greatest lineman, Frank Bruiser Kinard of the University of Mississippi. A great athlete a fine coach, a complete gentleman, and an honor citizen of the state of Mississippi. A dear, warm and gracious personal friend. In preparing this presentation I decided to assemble some background statistics and a list of honors Bruiser received during his long and great playing career. after I got them all together, I realized that compiling a group of near statistics and a list of honors was a feudal way to describe Bruiser Kinard as a football player. I believe that old cliché does it better; bruiser Kinard is and always was an all-pro lineman.

Bruiser Retired from playing football at the top of his career as an all-pro tackle, both offense and defense. On the combined National Football League and the All-America Conference All-Pro team of 1947. Bruiser Always had the hallmark of a champion about, because he had fierce pride to be the best that he could be at every single moment under all circumstances everywhere he performed. I think it is only fitting that the word of sports should salute him here today in Canton, Ohio, “the cradle of football”, The Hall of Fame, where only the greatest of football champions reside. I would like to say to Bruiser as he is enshrined in the Hall of Fame on this great day for he, his beautiful wonderful wife and family, Bruiser, may the wind always be at your back and may the good Lord hold you and your dear ones always in the hollow of his hand, thank you.

Thank you, Jack White. You know, he had to come all the way from San Francisco to say those nice things about me, and the funny part about it is he's said them as I told him too. So, Jack, I appreciate that very much, the long trip you had to make here to present on this day. I would like to thank two or three special people that have been most instrumental in my stay here in Canton since Thursday afternoon. I would like to thank Dick and Gloria Logan, they have been wonderful to me, my wife and Dr. and Mrs. Farra Varner. special thanks to Dick Gallagher, a wonderful guy and a great friend. He has to be the best director in the world. You know, I'm no longer a coach, I'm Athletic Director at the University of Mississippi just recently, and I believe as a director, I'm getting a good start. you know we've had three sellouts in three days.

We normally at our school would call an Archie Manning to give us a sellout, but Richard Nixon was called on by Dick Gallagher to give us a sell out last night, congratulations Dick. this is certainly an impressive occasion and to put it briefly, I am overcome with joy. The best part of me, however, is seated out here, my wife, Midge Kinard, and if you will permit me, I would like for you to see her now. Midge Stand up. And in closing, I accept this honor along with my former coaches and players because they were so instrumental in my life, and without those people, this would not have happened. Without you supporters of the sport, it will never happen anymore, so when why you continue to support the great sport called football. It's certainly a wonderful invention and there's no way to beat it for the price. So, get your tickets to any game in your area this year and supported the rest of your life. Thanks so much.