"Now’s the time to quit. I want them to remember me as a good end. I’ve heard those boos from the grandstand before, and believe me, it’s a lot more fun to quit with cheers instead ringing in your ears.” 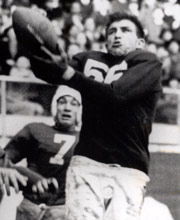 Bill Hewitt is most often remembered for his stubborn refusal to wear a helmet. He finally donned headgear in his final NFL season but only because new NFL rules left him no choice. While an interesting sidelight, this should not overshadow the fact that Hewitt was one of the finest two-way ends ever to play football at any level.

Bill was a terror on offense but absolutely peerless on defense. An "iron-man" performer who averaged more than 50 minutes playing time each game, Hewitt had a zest for competition and a record for making the biggest plays in the toughest situations. He was always conjuring up new gimmicks to foil the opposition.

One of his special plays called for a jump pass from fullback Bronko Nagurski. Hewitt would in turn lateral to another end, Bill Karr, racing toward the goal line. It was this play that gave the Bears a victory in the NFL's first championship game in 1933, a 23-21 win over the New York Giants.

On defense, Hewitt became the first player to make the masses take their eyes off the football just to watch him stymie the opponent. Because he had a jet-propulsion start at the snap of the ball, the fans tabbed him "The Offside Kid," because they couldn't fathom anyone reacting so quickly without being offside.

Equally impressive was his tackling and his uncanny knack of diagnosing enemy plays. Hewitt was the first to admit he wasn't much of a player either in high school or at the University of Michigan. Once he reached the NFL, it was a different story. He was named all-league as a rookie by one major publication and repeated the honor in 1933, 1934,1936,1937, and 1938. The last two times he was selected as a member of the Philadelphia Eagles. 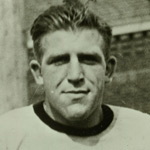 Drafted: Hewitt played prior to the NFL Draft being implemented.

Thank you very much. You know everybody thinks about today, a lot of people don't want to remember the past well, I remember the past. I don't remember Bill Hewitt very much because I was a very young man at the at that time.  Fact, when he came to the Philadelphia Eagles, I was one year old, and at that time we lived in the same house with 33 football players and the only reason why we kept the starting offensive center is 'cause he could cook. In 1933, when Ber Bell bought the Philadelphia Eagles, Bill Hewitt was starting in the championship game for the Chicago Bears, he was a master. He wore no helmet, he played both ways. He was a master of the lateral pass, he did everything.

He went on for four years to amny success. Bell went on for four years to many defeats. He tried Rabbi’s On the bench, he tried priests on the bench, he even tried Art Rooney  come in when he was playing against him and sit on his own bench, nothing worked, so in 1937, (well having the worst team in Pro Football), made a trade with George Halas and got the fabled Bill Hewitt. Hewitt went on for two more seasons, Anne had two of his greatest seasons. Hewitt was an individual, she was different, he was dedicated, he had to be, because Bell paid him no money. He was a great man in his time and somebody who should not be forgotten, and I'm very, very honored today to present this to his daughter, who was not alive at the time Bill was killed, And I think that if Bill was alive today, and I've heard many, many times the phrase coined, it told me a game, Bill would say it's not only a game, it's a way of life. Thank you.

Thank you very much – It’s A great privilege an honor to be here in Canton accepting this award on my father's behalf. He is being recognized with such great men that have made football the American tradition it is today. My only regret is that my father cannot be here to reap the harvest of his efforts, but I know he is here in spirit – Thank you so much.