"When you get old and past your prime to have a good day – any kind of a good day – is a memorable thing in a player’s life. What you do in your prime you expect of yourself but days that come at the end of the trail provide unexpected thrills whenever you think of them.” 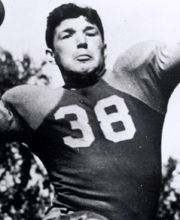 Although the National Football League didn’t keep official statistics until 1932, Arnie Herber’s third season, there is ample evidence to support the popular contention that Herber was the league’s premier passer. That year, the Green Bay Packer quarterback won the league passing title, something he would do again in 1934 and 1936.

Arnie threw a touchdown pass to give the Packers a 7-0 victory in the first game of his rookie 1930 season. The Packers won NFL titles in both 1930 and 1931 and remained in a perpetual contending position throughout Herber's 11-year tenure. His passes were always a dominating factor but he could also run, catch passes, and punt with the very best.

The arrival of end Don Hutson in 1935 gave pro football its first lethal quarterback-receiver tandem. In Hutson’s second game in the NFL, against the Chicago Bears, he teamed with Herber for an 83-yard touchdown reception. In 1935, the Herber-to-Hutson duo connected 18 times for 420 yards and seven touchdowns. Although an injury in 1937 reduced his effectiveness some, the Herber-to-Hutson mystic continued until Herber retired in 1940.

With many players serving in the military during World War II, the New York Giants brought Herber out of retirement for two more years in 1944 and 1945. He then retired for good with the reputation of being pro football’s great long-distance passer.

Herber was a basketball and football star at Green Bay's West High School who sold game programs as a teenager so that he could see the Packers play. He eventually migrated to tiny Regis College in Denver, but he soon was back in Green Bay, where he worked as a handyman in the Packers’ clubhouse when coach Curly Lambeau decided to give the inexperienced player a tryout. For $75 a game, the Packers inherited the first pro quarterback who consistently used the forward pass with game-winning effectiveness. 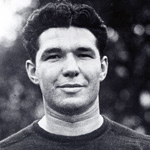 Drafted: Herber played prior to the NFL Draft being implemented.

Ladies and gentlemen, it gives me real pleasure and I mean this sincerely to welcome an old teammate of mine, the most accurate long passer in the history of football; Arnie Herber. He's the only member of the Pro Football Hall of Fame who made the big leagues in his own hometown. He was born and raised in Green Bay, Wisconsin, he attended St. Regis College in Colorado and also the University of Wisconsin in Madison.

Thank you, Clarke. I had a little speech all prepared I was gonna make for just a few words and now after I go here, they're so inadequate that I don't dare say anything because the feeling in my heart no one can ever realize how great it is. Thank you.