"The hardest thing will be no more locker rooms. No more Sundays. No more airplanes and training camps. You see each other torn down, angry, happy, injured. You shower with these guys, eat with these guys, sleep with these guys. You don’t spend that much time with your wife…You see them give up everything for you. You really get to love these guys. I know I’ll miss that.” 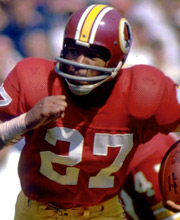 Ken Houston excelled as the premier free safety of his era in a 14-year span that began with the 1967 Houston Oilers who drafted him in the ninth round of the AFL-NFL draft. He earned a starter’s role by the third game of his rookie season. Two weeks later, in a game against the New York Jets, he scored two touchdowns, one on a 71-yard blocked field goal attempt, and the other on a 43-yard interception return.

After excelling for six years with the Oilers, Ken was traded to the Redskins for five veteran players in 1973. The Redskins once referred to Houston as "pro football's most underrated super-star," but his capabilities were widely recognized. He won all-league acclaim with the Oilers in 1969 and 1971, and then was either All-Pro or All-NFC with the Redskins every year from 1973 to 1979.

He was selected for either the AFL All-Star game or the AFC-NFC Pro Bowl 12 straight seasons from 1968 through 1979. With a long, fluid stride, he had excellent speed and quickness. His 6-3, 197-pound frame made him an ideal pass defender. Yet his lean, muscular body helped him to become a punishing tackler.

Once he got his hands on the ball, he was a talented runner. Even before he finished his tenure with the Oilers, Houston had assured himself of a spot in the NFL record book by returning nine interceptions for touchdowns. He also tied two other records with four TDs on steals in one season and two interception touchdowns in a single game. Altogether, he stole 49 passes and returned them 898 yards. He also recovered 21 fumbles and scored 12 touchdowns, nine on interceptions and one each on a punt return, a fumble return, and a blocked field goal return. 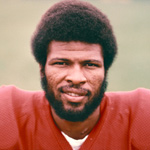 Mr. Muzzy, ladies and gentlemen, members of the Hall of Fame and the inductees. It is a double pleasure for me to be here today, by first to help induct Kenny into the Hall of Fame and, secondly, because the team that I coached here in 1962, we played in the first Hall of Fame game, we played against the New York Giants, the St. Louis Cardinals are here along with a former player of mine, Larry Wilson. It is a privilege and a pleasure to help present Kenny into the Hall of Fame which he worked so hard for and struggled so hard for during the entire length of time he played in the NFL. I salute Kenny and his fellow inductees for their performances they have given throughout the years in the league.

I feel a certain justification for Kenny to have asked me to be his presenter, because back in 1967 when Kenny was a rookie defensive back for the Oilers, after the first Saturday scrimmage we had, one of the scouts for the Oilers came to me and said you better talk too, be of our rookies because he is ready to go home. And he told me who it was, and I had about a one & one-half hour conversation with Kenny in which I convinced him that he ought to at least stay for one more week to get a chance to prove to himself the abilities he had. One week grew into 14 years and gave him the opportunity to sit on this platform today. Ken was a 1967 graduate of Perry U's A&M; he later went on to get his master’s degree in the same school. Now he takes second seat to his lovely wife, Gustie, in this respect because she has her doctrine in mathematics.

Ken then came onto the Oilers and played on there for about 6 years and then went on to the Washington Redskins. That trade by the Redskins was the possible chance of the Indians to make up for the Manhattan Transfer. Kenny was a steal by the Redskins as he already achieved stardom and had become a great strong safety, possible being the best strong safety in the NFL at that time. He not only succeeded on the football field, Kenny received many honors for his work with young people both in Washington and in Houston. In 1981 he received the Bryon White Award for humanitarian service from the National Football Players Assoc. The other awards he received were the Dept. of the Army award for civilian service, the Vince Lombardi Award, the Bart Star Memorial Service award. He received the Redskins Man of the Year Award twice, he received the Timmy Award from the Special Olympics, he received the Dodgers NFL Man of the Year Award, and he has been picked on the State of Texas All-Time Professional Football Team.

Ken played 197 games in the NFL, 103 of those consecutively until he broke an am in 1979. In those 14 years he made 12 Pro Bowls which is just less than Merlin Olsen, who is the only player that ever played in more Pro Bowls than Kenny Houston. Kenny was chosen All-Conference or All-Pro eight times and he has a career record of interceptions returned for touchdowns which has 4. Both of these records were achieved while he was playing for the Houston Oilers. At the close of his career, he was recognized as possibly the best strong safety that ever played in the game. Bobby Beathard, who was his general manager at Washington, probably best described Kenny when he said, "Kenny Houston is your friend whether he knows you are not." He may not know your name, but he will still be your friend. He lives by his faith and beliefs and he is the leader. His heart is full of love for other people and there is no better role model for the youth of today like Kenny Houston. It is with great pleasure that I present Kenny Houston to the National Football League Hall of Fame. Thank you very much.

It is a very special moment for me. I am in awe of what is happening. I really am. Because in my lifetime, I had no idea in my brain that I would be standing here in the Hall of Fame. I always thought the Hall of Fame was reserved for other people. I got a real big kick out of watching these guys play, Deacon Jones, Bobby Bell, the guy that I broke his record, thank you. I have talked to him about that and you know at the time I was doing this, running these touchdowns back by interceptions, I had no idea I was after a record, the record at that time was 7, is that right?

I had a chance to meet Herb Adderley. I thought Herb was an older guy when he was traded to Dallas. In fact, I thought all the Green Bay Packer guys were older guys. Just the whole team up there. And Fuzzy, I do respect you and I hope that one day everything will work out all right and you've been a great person to me and you can fit anywhere in the world, I want you to know that. I also had a chance to see my roommate, Calvin Hill. Calvin Hill was the guy I roomed with at the Washington Redskins and I am very happy to see him. There are so many people that are deserving and the thing I appreciate about this even though it is an individual honor, you cannot get here by yourself.

I have several members of my family in the audience. I have my brother Joe, Shirely, I have Linda, I have my son, I have my wife, Gustie. I have all the people who came in with us and this would take up all my time, but well, it took up all the Hall of Fame's time getting them it1 here, but I want you to know that this has been one of the greatest weekends of my life. I had a chance to ride in the parade today. I v1ant to thank the people of Canton because you have made this a wonderful week. Like Paul, I plan to be here every year like Deacon. You know he comes here to eat the food, but I want to come to eat the food too, but this is the best weekend ever. You know when I hear people, even at the present moment, I heard Coach Lemm say I represent the Hall of Fame. I really think he is talking about someone else because I don't see myself in this setting. You know immortality is a word I never learned to use. I have always been afraid of it. Immortalized to me would mean things that I would just like to go into. But to think that my children, my nieces, my nephews, my brothers and sisters, they will be able to come for all times. But I think what happens when I get back here next year and pinch myself and I will say this is your best in the Hall of Fame and for an honor like that is something unbelievable.

Now you know I have been with a couple teams, the Houston Oilers, the Washington Redskins, but this team behind me will be the team I will remember. Guys that I have had to watch, had a chance to play with, guys here that made this thing really special and you know I felt a little bit intimidated, not a little a lot intimidated. I got here and saw these guys making beer commercials and stuff like that and Ray Nitschke really gave me a hard time and I think he makes you earn your way to the Hall of Fame. Doak Walker ... there's only one hero in Texas, Calvin Hill, and that is Doak Walker. To me this is a guy, what can you say. Fran Tarkenton has thrown a ball for 27 .... I haven't walked 27 miles in my life, this guy has thrown the ball for 27 miles. Willie Lanier was so bad. We both played defense and I was afraid when he was on the field. He was just like you know, u11believable and to come in with people like this, I think awesome is a good word to use. Coach George Allen. He is here somewhere I know. Hi Coach. I tell you the thing about him I played six years in Houston and he discovered me, he really discovered me.

I went to the Washington Redskins and to me that is one of the highlights of my career. He is a guy who can bring the best out of any player. The saying was that if you played long enough you will see time in Washington that’s how Calvin Hill got there. I am so elated to be in this setting. I am so happy about the people that came down from Kingwood. I know that some people are watching who wanted to be here who couldn’t come. I just want you to know that I am very proud at this moment because the greatest part of my life is the epitome of professional football and the best part of the whole thing, I am getting to go in at the bottom with the people that are my peers. I would like to thank you for letting me share this moment.