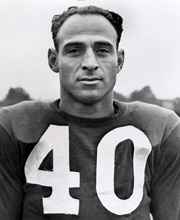 When Wayne Millner joined the Boston Redskins in 1936, the news so excited the team's new coach, Ray Flaherty, he promised to resign if "we don't win the championship with that big Yankee playing end."

The Redskins did win the Eastern Division title that year and Millner, a star on both offense and defense, was a major contributor. For the next few seasons during which the Redskins, who moved to Washington in 1937, won two more divisional titles and one NFL championship, Wayne became the favorite target of the brilliant passer, Sammy Baugh.

The two combined for many a blockbuster play during some of the Redskins' finest seasons. In the 1937 championship showdown with the Chicago Bears, Baugh threw touchdown passes of 55 and 78 yards to Millner, then used his as a decoy when he threw the game’s winning pass to Ed Justice. Wayne wound up the day with nine catches for 160 yards.

Millner was among the last of the outstanding two-way ends. When he wasn't catching Baugh's passes, he was blocking for him. He was competitive, determined, and known for his sure hands.

A “money player,” he was always at his best when the stakes were the highest and the pressure was on full force. Millner, who entered the Navy after the 1941 season, wound up his seven-year career in 1945 with 124 receptions for 1,578 yards and 12 touchdowns, which were the best ever for a Redskin up to that time.

Had he played for any other pro team, he might have captured more headlines but the Redskins had Baugh who gained most of the publicity. There may also have been one other factor. So often did Millner deliver under pressure, the press and fans and even his own coaches came to take his clutch performances for granted.

Mr. Mayor and Mr. Commissioner. Ladies and gentlemen. This is certainly a privilege to be in here, be here in Canton today to participate in these festivities and it'll be a day I'll never forget. Wayne Millner was a fine college football player; he made a great name for himself at Notre Dame University. One of his most famous efforts was in the game in 1935 between Ohio State and Notre Dame, when Wayne made a thrilling catch in the last seconds of the game to win it for his team. This and many other outstanding feats by Wayne gained him National comments in college football. Wayne contributed just as much to professional football as a member of the Washington Redskins. He was equally as good as a blocker and a tackler, as in those days a player had to play both ways. Wayne would block as well as any of the ends, no matter what size they were or how good they were, in the National League, despite the fact that he only weighed 185 pounds. Wayne was as important as any member of the Redskins in winning four Divisional Titles, and two World's Championship's, as a member of the Washington Redskins, in the years that I was there. I do not know where Wayne would play today if he was on a professional football team, but I do know one thing, Wayne would be on the first team. He's that type of player. He has the ability and the heart and the confidence, that only the top players have. He would probably be a split-end flanker or a defensive back. It gives me great pleasure to present one of the best for this thrilling honor, of becoming a member of Professional Football's Hall of Fame Wayne Millner.

Thank you, coach. Ladies ang gentlemen. Hello sweetie, there's my beautiful wife sitting right down there. Just like I rehearsed it, I'd rather be out these covering the kickoff like we used to have to do, I'll be on the receiving end. Ohio's been wonderful to me. Number one is the day Notre Dame played Ohio State in Columbus. We came out in the winning end of the score. Cleveland, I used to play against your old Cleveland Rams, who are now the Los Angeles Rams. Ladies and gentlemen, today, you put me in here at Canton, so, I'm gonna say that Ohio State, the state of Ohio, pardon me, is my second home if it's alright with you. It's an honor to be enshrined with the gentlemen that I'm being enshrined with today. You know it's a funny thing, when you usually get up to make a talk, you tell jokes and things like that, but you can't do that ladies, and gentlemen, today. This is the proudest day of my life, and all I can say is thank you.