"In those days the more things a player did, the more pay he could demand. I could run, kick, pass and catch and that made me a valuable property.” 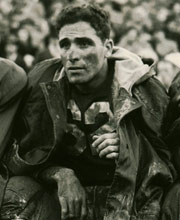 In 1946, Charley Trippi, a two-time All-America from the University of Georgia, was a key figure in the inter-league battling between the new AII-America Football Conference (AAFC) and the National Football League.

The AAFC's New York Yankees were so sure they had signed him to a contract that they called a press conference in New York to announce the happy news. But while the New York newsmen gathered, Chicago Cardinals owner Charles W. Bidwill Sr. announced in Chicago he had signed Trippi to a four-year contract worth $100,000. For those days, the size of the contract was stunning news and a big breakthrough in the inter-league war.

Trippi's acquisition completed Bidwill’s quest for a "Dream Backfield." Although Bidwill did not live to see it, Charley became the game breaker in a talented corps that included Paul Christman, Pat Harder, Marshall Goldberg and, later, Elmer Angsman.

Never was Trippi more magnificent than in the 1947 NFL Championship Game when the Cardinals defeated the Philadelphia Eagles, 28-21. Playing on an icy field in Chicago, Charley wore basketball shoes for better traction and totaled 206 yards, including 102 yards on two punt returns. He scored touchdowns on a 44-yard run and a 75-yard punt return.

Trippi could and would do anything on a football field. He played as a left halfback for four seasons before switching to quarterback for two years. Charley then moved back to offensive halfback for one campaign before changing almost exclusively to the defensive unit in 1954 and 1955. He also was the Cardinals' punter and he excelled on the punt and kickoff return teams.

Due to relaxed regulations during the war years, Charley played in five College All-Star classics, two while at Georgia, two while in the service and a fifth as a Cardinal in 1948. 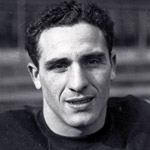 Drafted: 1st round (1st overall) in 1945 by Chicago Cardinals

Paul Shebby (presenter):
Mr. Mayor, honored guests, ladies and gentlemen. It's a real pleasure for me to present the next candidate for induction into Pro Football's Hall of Fame. Success is spelled P-E-P by this man, and when you break this little three letter word down into a formula, it means pride plus effort equals production. How much pep did this man have is evidence by the success he had. During his high school days at Pittstown, Pa. he was selected on the all-state football team. And he led his high school team to undefeated seasons and conference championships. At the University of Georgia, he was selected on the All-American Team two years in a row. He led great Bulldog teams to conference championships and undefeated seasons, and victories in the Oil Bowl, the Sugar Bowl and the Rose Bowl. As a member of the armed forces, he was named to the all-service team while playing with the third Air- Force during WW-II. As a pro playing nine seasons with the World Champions - Chicago Cardinals during the glory days of the dream backfield of Angsman, Chrisman, Harter, and Trippi under the coaching of Jim Conzelman. He was an all-pro, if there is an all-pro. If the criterion for an all-pro is giving your best, every second of every game, then this man is truly an all- pro. He holds an outstanding record, having participated in four All-Star games, as a collegian and this record, I don't think, ever will be equaled again unless we get into another war, a shooting war, a declared war. And, of course, he played with the National Champion Chicago Cardinals in 1948 in the All-Star Game. And so, it’s with a deep feeling o

f personal pride, that I present for induction to Pro Football Hall of Fame, an outstanding athlete, a great sportsman and a true gentleman, Charlie Trippi.

Charlie Trippi:
Ladies and gentlemen, half the walk has transpired here the last few days, I just wanted to say I’m glad I played football. You know, football has enriched my life in so many ways that it also gave me a lifetime ambition, and made me set many goals, but this goal today is probably the greatest. You know in football, when you play football, you have many great weekends, but this to me would be a lasting weekend I'll never forget. You know in football when you have success a lot of times, it often reflects on the people that you played with and to them I want to say thank you. And in conclusion, I'd like to pay tribute to those people primary responsible for my career. First my high school coach, Paul Shebby, then my college coach Wallace Butts, and my pro coach, Jimmy Conzelman. I want to thank them for their guidance and their understanding. Thank you very much.