"The word desire is overworked, but a quarterback must have desire. He can’t discourage easily. He has to be confident that if he just hangs on, against adversity, he finally can get the job done." 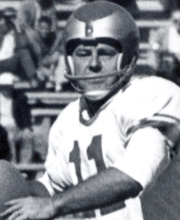 Norm Van Brocklin was a standout quarterback for 12 seasons in the National Football League, the first nine with the Los Angeles Rams. Then he was traded to the Philadelphia Eagles in 1958 and, within three years, the “Dutchman” had guided the Eagles to the NFL championship.

Without a doubt it was his finest performance in a brilliant career. One of the most colorful and competitive individuals that pro football has ever seen, Van Brocklin blazed a sometimes stormy, but always eventful path in his dozen campaigns as an active player.

Norm left the University of Oregon, where he still had a year's eligibility remaining, to join the Rams in 1949. The only problem, from Van Brocklin's standpoint, was that the Rams already had one future Hall of Fame quarterback in Bob Waterfield.

The net result was that two great quarterbacks had to share passing duties for a few seasons, a situation that any great competitor, which Norm certainly was, couldn't be expected to accept with any enthusiasm. Still, Van Brocklin won the NFL passing title in both 1950 and 1952, even though he was playing only half of the time on offense. He added a third passing championship in 1954.

His greatest day as a passer came in 1951 when he threw for a record 554 yards against the New York Yanks. It was also in 1951 that Van Brocklin threw a 73-yard pass to Tom Fears that gave the Rams a 24-17 victory over the Browns and the only NFL title the Rams had won since moving to Los Angeles.

In Philadelphia he was given a free hand at running the offensive show, and behind his leadership the Eagles won the NFL title in 1960. Thus, the “Dutchman” was the only man to defeat a Lombardi-coached Green Bay team in championship game play.

Thank you. Governor Gilligan, Mr. Mayor, Commissioner Rozelle. I certainly am glad he brought up the subject of my career football. As a senior in high school, 17 years old, 119 pounds, I was a third string halfback, And I am sure that made a real impression on this Hall of Fame distinguished audience. But it is indeed my high honor here today to present to you the anchor man of the distinguished class of 1971 honorees. He was born in 1926 in a small town in the mid middle West. His family, like so many others, in the early days of the depression moved to California. Here he grew up as a relatively poor boy, who worked hard and acquired essential values which would follow him throughout his career in football. His career in football is to amount to a study of the development of the game for the last 25 years. There was a delay right at the beginning, by an enlistment of the Navy in World War Two. Upon his discharge in 1946, he enrolled at the University of Oregon where he was a far down the line substitute tailback in the single wing formation, and incidentally, his running style has been compared to that of a wounded hippopotamus. At the same time, however, a new coach appeared on the scene at the University of Oregon and installed the T-formation. He's well known to all young people here in Canton. When he installed this T-formation, he told our enshrinee that he was going to be quarterback. He preceded to become an all-American as a junior and LED Oregon to a conference title and into the Cotton Bowl against Doak Walker and Southern Methodist.

One of our Hall of famer's, the late Dan Reeves of the Los Angeles Rams realize that his great pro-prospect had completed his degree requirements in three years and drafted him as a future in the fourth round, and how right he was. He led the League in passing 3 times and through in a couple of punting titles to boot. in 12 seasons and 140 league games, he passed 173 touchdowns. His 554 passing against the New York Yankees, September 28, 1951 is the all-time NFL record. Can you play the 8 Pro bowls get on five championship teams, 1949, 1950, 1951 and 1955 with the Rams, and in 1960 with the Philadelphia Eagles? Yes, his credentials are indeed impressive. But he probably belongs here on the strength of just one memorable season alone, and that is the 1960 Eagles championship year. They call him the coach on the field and that amazing eagle drive for the NFL championship. The Eagles lost the opening game to Cleveland 41-24, however, with our inductee and command, they ran off nine straight victories. Five times during the streak they trailed at halftime, but each time the old pro would go to the blackboard in the dressing room and shows teammates just what they were doing wrong and then take to the field to bring the Eagles from behind to victory. This was the only loss ever suffered by his fellow classmate. Here today, the late great Vince Lombardi in a title game.

Allie Caris the great old pro from Detroit said nobody ever played quarterback like he played it for the Eagles in 1960. One of his fellow teammates of that year, Pete Retzlaff, says and I “she is at least three people, all perfectionist.” in 1961 he went directly from the playing field to head coach at the expansion team, the Minnesota Vikings. Here he developed a nucleus of the Vikings championship teams of the last few years at the height of the war between the NFL and the AFL. In 1968 he came to the Atlanta Falcons as their head coach and now bears the title of general manager as well. His companion through all these years, both good and bad, has been his wife Lorrie, who was his college biology teacher. they have six children, Karen, Lyn, Judy, Shelly Joe, Alan and Randy. He was indeed a straight “A” student in biology. No one has had a more stormy or more colorful career than his enormously talented, fiercely competitive and inspired leader in its chosen profession. Ladies and gentlemen, it is a proud moment for me to present to you, the inimitable “Dutchman”, Norm van Brocklin.

Thank you, Rankin. Mr. governor, mayor, commissioner, and football fans. It's rather fitting to me, I feel it fitting to me, the fellow who gave me my first opportunity to play football competitively at the college level was a man from Canton, Ohio. Somebody I am sure you people remember here, the late Jim Akin. He gave me my first chance at the University of Oregon and something that I always remember and be very grateful for it. I have in my football career, so many things that I have To be thankful for; The people, the times, the events, the ups, the downs, but above all, in football and some of my fellow inductees have touched on it, is the fact that out of all of this we feel as one member of a football organization, and today I feel so insignificant to the great game of football to all demands that have preceded me in the Hall of Fame, all the esteemed men and all the esteemed men sitting directly behind me. From the bottom of my heart in the love of the game, I hope that your choice of Norm Van Brocklin To enter the Hall of Fame, that I am so deserving. Thank you.