"I was a strict, straight-arrow quarterback when I came to the 49ers. I learned to become free…I had always tried to please every coach I ever played for, I guess to the point I became their mirror image. 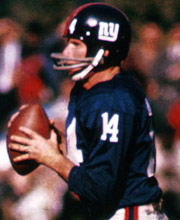 Y.A. Tittle played 17 seasons of pro football. He played three seasons with the Baltimore Colts of the All-America Football Conference (1947-1949) and one with the Colts in the National Football League (1950).

He played 10 seasons with the San Francisco 49ers and a final four seasons with the New York Giants. Although Tittle had excellent personal statistics while playing for the Colts and 49ers, the one thing that eluded him was a championship.

Then, in 1961, when Tittle was traded to New York, it looked like his fate would change. The Giants were contenders. However, when he joined the team, he was about as welcome as a bill collector. The Giants were a veteran, close-knit group, proud of their past successes. They knew that Tittle would be battling a team favorite, 40-year-old Charley Conerly, for the quarterback job. The Giants may have feigned cordiality to their new teammate but, for weeks, "Yat” was the loneliest guy in town.

When the 1961 season started, Tittle and Conerly shared the quarterbacking duties but as the Giants moved nearer to the NFL Eastern Division crown, it became more and more evident that Tittle was the guy making it all possible. By the time he was named the NFL's Most Valuable Player, the cold-shoulder treatment from the Giants had long since evaporated.

In 1962, Tittle played even better with 33 touchdown passes and a career-high 3,224 yards. A year later, his TD figure went up to 36; he completed 60.2 percent of his passes, and again was named NFL Player of the Year. A terrific competitor who was always willing to play "hurt,” Tittle led the Giants to divisional titles in 1961, 1962, and 1963. Even though they failed to win the overall NFL crown, those were the "glory years" in New York when Tittle was at the helm.

Y.A. Tittle Came to the Giants in 1961 in what was to have been the Twilight of an already illustrious career. Without warning, the Twilight became brighter than new time period in four years, Y.A. surpass all the achievements of his previous 13 years of professional football. He led the Giants to three consecutive Eastern Championships. He rewrote the Giants record book and added many chapters to that of the National Football League. He shares the record of most touchdown passes in one game, Seven. The record for the most touchdown passes in one season, 36. He is second for the most yards gained passing. The records show that he was one of the most productive pastors of all-time. We know that his great value was as an Inspiration; inspired player and fan alike. New York City took him to its heart as it has taken few if any athlete heroes.  New York loved YA, as it loved few. Y. A. live to New York as he loves everyone. Y.A. In joining this company, you will grace this Hall of Fame. You come into it with credentials that are equaled by one only a few and I know that no one will accept this honor with the greater or deeper realization of its significance. Y.A. Tittle.

Ladies and gentlemen, distinguished guests, and all the fans of Pro Football and the generous hospitality that has been afore us from all of you people from Canton. This is truly the greatest thrill my life, because I sincerely all of my life have loved the game of football. And when I was asked this year and given this great honor, I was notified in February of this year, that I might select someone to represent me here that would be a friend and someone associated with football and immediately I wanted someone that was my friend but also love the game as much as myself. And, in 1961 when I went with the New York Giants and join Mr. Wellington Mara, I came across a man that loved his came, the New York Giants, more than anything I've ever seen. He loved his players more than any owner that ever seen Love his players and all of his players loved him and also, I feel like myself he really loved the game of football. And Wellington, I'm very proud that you are representing me here today. I feel like that the game of football, I promised my wife I wasn't going to get this way. I feel that the game of football is a game played by people. I really and truly do not completely by the over sophisticated ideas of computers and the game being played without feeling, thank goodness it hasn't come to that. I think that all people that play football or motivated by other people. I can't believe that a football player can really play when out alone, because so many people most influence his potential greatness of if you call it greatness, and I know that has happened in my life, and I certainly am not going to burden you people with me reminiscing about all my old teammates through so many years, 'cause I played so long, it would take you four days to listen to them all. But I would like to mention a few that got me going.

My father, she had three sons that played football, And I was the second one, he was the one who convinced me that I could play high school football. Otis Mitchell, my high school coach gave me the late Bernie Moore, who convinced me that I was good enough to be a pro. Then, I went into the pros And I met Cecil Isbell. Cecil Isbell was not like other coaches that pumped up his athletes, he really and truly thought that I was the greatest pastor that he had ever seen, at least he convinced me of that. So, I had some great years in pro sports thanks to the inspiration of so many of those people and to the 49ers playing under Buck Shaw. Also seen a great player like Bucky Albert play, who is a great inspiration to me as a player and of course, to the New York Giants and my four years with Wellington Mara. I also promised my wife that I wouldn't do this either, that I would introduce her and mention her as especially as someone that has inspired me, because she truly has shared my love for her with that of football. And also, she also inspired me in some other ways where she remind me so many times after so many interceptions in some of the game and ask me so many times, was I really colorblind? I really don't know how to express what I mean; I know all of the years that I played we never won a world championship that I so much wanted. We came close three times, but I will really settle for this, 'cause this is really about the height of all my dreams. Thank you.