Top 20 Series. There are many ways in which a player's success in the NFL is measured. One of the most obvious is a comparison of statistics. Each week during the NFL's regular season Profootballhof.com featured updated Top 20 lists for four main statistical categories.

Here, thanks to the help of Elias Sports Bureau, is an expanded look at Top 20 leaders in multiple NFL statistical categories. Check out where today’s stars compare to NFL greats at the start of the 2013 NFL Season. | Return to Top 20 at the Start of 2013>>> 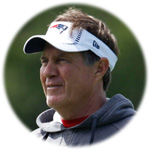 CAREER NOTES. New England Patriots coach Bill Belichick completed his 18th season as an NFL head coach. He led the Patriots to a 12-4 record and AFC East title in 2012. Belichick has also found postseason success throughout his career as he owns an 18-7 record, which ranks third all-time in playoff wins trailing only Hall of Famers Tom Landry (20) and Don Shula (19).