After three seasons in a small river town in Ohio, the Portsmouth Spartans relocated to Detroit in 1934 and became the Lions.  Beginning that first season in the "Motor City" the team hosted a game on Thanksgiving, a tradition that has become synonymous with Detroit.  The Lions' long history has been filled with dynamic personalities including 14 members of the franchise who were elected to the Hall of Fame.

PRIDE OF THE LIONS 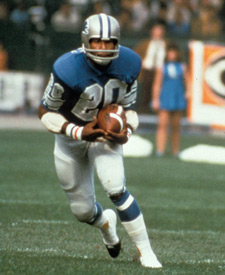 The Pride of the Lions is a permanent display at Ford Field honoring the greatest players in the long history of the franchise.

The charter class of 12 players, that includes Hall of Fame cornerback Lem Barney (left), were honored during a halftime ceremony on Nov. 22, 2009.