"I could make tackles until I’m 50. Your body may go, but your heart doesn’t.” 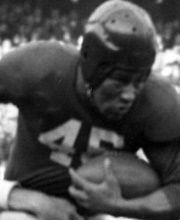 During the decade of the 1950s, when the New York Giants were a perennial contender in the National Football League, Emlen Tunnell served as the key “strut” in the Giants’ famed “Umbrella Defense,” and in so doing, put fear into the hearts of the opposition.

He was known as that team's "offense on defense." Tunnell entered pro football as a free agent in 1948 after having spent time at the University of Toledo and Iowa as well as time in the Coast Guard.

At Toledo he suffered a broken neck. His injury was severe enough that both the Army and Navy rejected his enlistment efforts during World War II. The Coast Guard finally accepted Em for duty. Following his Coast Guard service, Tunnell returned to college at the University of Iowa. He left Iowa after the 1947 season.

Most pro teams thought Tunnell would play a third year at Iowa so he was not drafted in 1948. Deciding to seek a pro job on his own, he approached the New York Giants, who eventually offered him a contract.

The umbrella defense that made the Giants so successful in the 1950s was basically a 4-1-6 alignment with two defensive ends dropping back to team with four defensive backs on passing situations. As the safety, Tunnell played at the top, or back of the alignment.

Always a major contributor to his teams' defensive successes, Emlen intercepted a then-record 79 passes in his 14 seasons with the Giants and the Green Bay Packers.

Thank you, Jim. Yesterday afternoo11 a gentleman named, I hate to use the first name that I heard, Cooty Rich, asked me about my experiences in football and he began by asking me whether or not, I ever played the game. I'll be perfectly truthful with, looking back on it now and standing here in the Hall of Fame, I wish I had played football, but I had a very deep religious conviction when I was growing up which kept me from playing the game; I was a very devout coward. Just about 20 years ago, come next spring, I was in the New York Giants football office which was then on West 42nd Street with a man whom I cherished as the closest friend that I've ever had, who's in the Hall of Fame now, and went in with the first inductees, Tim Mara. And I remember that day in the spring when a fella came in the office, said that he had not been drafted by any team in the National Football League and he wanted to know whether or not he could get a tryout with the New York Giants.

In the beginning, the Mara's, Tim and his two sons, Jack and Wellington, probably were not too enthusiastic, but as this young lad went on talking, Tim became very enthusiastic. Tim didn't know anything about football, of course, he was a man capable of good judgement particularly when this young fellow said that, he had hitched hiked his way over to New York from Philadelphia, that's a neighboring village behind Gimble Bros. in New York. He said that if he didn’t get a contract from the Giants, he didn't have any money go back home again. They gave him a chance and here we are just a little more than 19 years later. I'm not going to tell you about him as a football player, I'm sure you know it. I will say that there were two seasons in which he, as a defensive backfield man, scored or rather gained more yards than our whole defensive team put together. It's too bad you didn't play last year, Em, you probably would have doubled them.

He did many things; he was a great football player because he had tremendous desire, he had great dedication and he was willing to pay the price with discipline. But in closing, before presenting one of the dearest friends that I've had through the years, in presenting him for induction into the Hall of Fame. I would present him as all of the other gentlemen who have gone in this morning can be presented not just as a football player but as a wonderful wonderful human being with a great big heart for others, in fact I've never heard him condemn anyone. Somehow or other he has a way of understanding everyone with whom he has ever come into contact in saying something nice about someone. I wish that I had found perfection of charity in my early years quite as easily and as completely as he has found it. I would like to present him as a man with a tough body and a big heart, a man with a wonderful soul and I'm so happy, so happy that he's coming into the Hall of Fame of Football because he loves the game so much and because I think he's a wonderful, he was a wonderful football player, and Em, if you go before I do when I get to the door of the eternal Hall of Fame I hope you’ll remember me as your presenter on this occasion: Emlen Tunnell.

Well thanks Father Dudley like you said somebody up there likes me. It's a pleasure to be here and I'm a little overwhelmed by all this and I'd like to thank the good Lord above, my mother, and my friends that I've made over the years. And I didn't get married until I got out of football, but I'd like to give my wife a pat on the back. But most of all I'd like to thank the Mara family that were so nice to give me a chance to play a game that I liked. I guess it goes a little bit beyond like love, and I'd like to thank all the friends that I have here, that came here to have a little fun with me. I know that I won't forget it, but I'd also like to say a little word of thanks to the fellas that are sitting behind me that I know and that are in a game that I liked a lot but most of all and the last thing before I get a little choked up here, I'd like to thank the truck driver. Wherever he is that gave me the ride over to New York.