The Rams joined the NFL in 1937.  Success came early and often for the franchise which was the first major sports team to move to the west coast.  The team slipped in the late '50s and early '60s but returned to the top of the league in the late '60s and '70s.  In 1999, the Rams won Super Bowl XXXIV marking the team's first NFL title since 1951.

The Rams history is filled with outstanding players and performances. 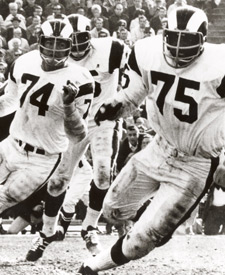 More on the history of the Rams>>>