"It is still an individual thing, a question of running the pass pattern correctly. Pass patterns have probably changed less than anything else in football.” 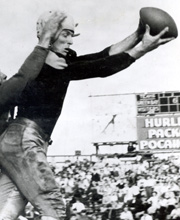 Don Hutson’s first touchdown came on an 83-yard pass from Arnie Herber in his second game as a Green Bay Packer. He wound up with 99 career touchdown receptions, a record that stood for more than four decades. When Hutson retired in 1945 after 11 superb seasons, he held 18 NFL records, including 488 career receptions.

That was 200 more than his closest competitor. Hutson invented modern pass receiving. He created Z-outs, buttonhooks, hook-and-gos and a whole catalog of moves and fakes. Although he had been an All-America at Alabama in 1934, there were plenty who doubted the skinny speedster could stand the pace of pro football. But it wasn't long before his mere presence on the field had changed the defensive concept of the game.

Don could outmaneuver and outrace virtually every defender in the league. He led the NFL in receiving in eight of his 11 seasons and in scoring five consecutive years. Twice, in 1941 and 1942, he was named the league’s MVP.

Like everyone in the days before free substitution, Hutson was a 60-minute player who spent most of his career as a very fine safety on defense. In his final six seasons, he swiped 30 opposing passes. Often after scoring a touchdown, he would kick the extra point. In one quarter of a 1945 game, he caught four touchdown passes and kicked five PATs for an amazing 29 points.

Had it not been for a unique decision by NFL President Joe Carr, Hutson might never have become a landmark pass-catcher. After college, Don signed contracts with both the pass-minded Packers and the NFL’s Brooklyn Dodgers, a team that rarely passed. Carr ruled the contract with the earliest postmark would be honored. The Packers' contract was postmarked 8:30 a.m., 17 minutes earlier than the Dodgers' pact. Thus Hutson became a Packer. 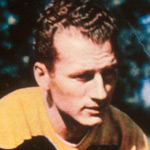 Drafted: Hutson played prior to the NFL draft being implemented.

Thank you, Bob. Sports fans, it took me twenty years to catch up and meet Don Hutson and it is a great pleasure and honor for me to say a few words about him today. Don Hutson set records for pass catching and scoring which only legislation can wipe out. He is a football yard stick. Each bright new receiver is hailed as a second Don Hutson and later perhaps as a better than Hutson. Then time turns the page on that player and Don is left to wait the next comparison to come and go. Hero of Alabama’s 1935 Rose Bowl team, Hutson scored on his first Packer play, an eighty-yard conspiracy. For eleven years thereafter Packers’ foes couldn't tell when it would be or happen again which it did often enough for him to become the pass catching champion eight times, scoring leader five times. To his touchdowns he added extra points and field goals. Hutson created pass patterns and developed faking to an almost federal offense. His impossible catches were not luck. He practiced fetching off target passes. The Packers won three World and four Western Championships with him. Not until his final season did they fail to finish one, two and then it was third. Don Hutson.

Thank you very much Dante for those kind words. Ladies and gentlemen, for me to fully appreciate the honor of being inducted here today all I have to do is look at the names of the persons on the list that are also going in. I know all of them, and while I played, I got to know some of them too well you might say. That’s why I appreciate it. It’s a great honor and thank you very much.