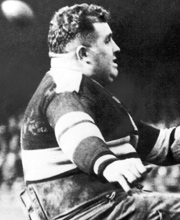 Wilbur "Pete” Henry signed with the Canton Bulldogs the same day – September 17, 1920 – that the National Football League (first known as the American Professional Football Association) was being organized in Canton, Ohio. In the Canton Repository the next day, the Henry acquisition was banner-headline news while the birth of the new pro football league was relegated to page three.

It’s understandable that the newspaper editor could not have grasped the significance of the league meeting. Under any circumstance, Henry was an established superstar, a valuable addition to the Canton team and worthy of headline attention. At first glance, however, Henry did not look like a football player.

Seemingly both short and pudgy, he looked soft and fat at 5-11 in and weighing 245. But his looks were truly deceiving. Henry had the swift reflexes of a man-eating tiger. Good-natured, easy-going and prone to laughter off the field, he was an uncompromising competitor on the gridiron. For the Bulldogs, who won NFL championships in both 1922 and 1923, Henry was a major contributor. Among his game heroics was a 40-yard field goal that tied Akron, 3-3, and preserved Canton's unbeaten season in 1922.

Henry did much more than just block and tackle with monotonous efficiency. Versatile, he was even used occasionally on a "tackle over tackle" play. "Fats," as he was also known, was a superior punter, placekicker and dropkicker and, for many years held a spot in the NFL record book for his kicking exploits.

The multi-talented tackle reportedly once dropkicked a 45-yard field goal and boomed a 94-yard punt. “Fats” might even have been more devastating on defense. One opposing coach thought that running right at Henry would be an effective way to neutralize the big man. After Henry flattened the entire side of the line, the coach abandoned his foolish game plan. 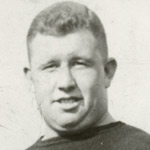 Drafted: Henry played prior to the NFL Draft being implemented.

Ladies and gentlemen, it’s good to be back to the old hometown. It’s wonderful to be able to stand up here and say a word in behalf of a great football player Fats Henry, Pete Henry. Not only was Pete a great technician of the football field, he was a great example. He’s been a great example to all people who are interested in seeing the game of football and certainly those who have played and are playing football. I think it would behoove every high school football player, every college football player, every professional football player to try to follow in the footsteps of Pete. I had the privilege of working out as a high school football player on the same field with the Bulldogs back with Pete Calac, Joe Guyon, Jim Thorpe, Guy Chamberlain, Bull Low, right on down the line, and Pete would stay out after practice when he came on the field on Old Meyers Lake Park field and take his time, his energy and effort, to help coach we kids who were playing in high school. Pete was a close friend of my father and mother. We had many days together, and any little success I think that I might had personally as a football player I received from Pete, a great player, a great example, and decidedly a gentleman right down to the roots. Thank you.

Now it’s my pleasure further to ask Harry Robb to give you detail, the real detail, the technical detail on his teammate Pete Henry.

Ladies and gentlemen, I consider it a great honor to have this privilege of receiving this plaque for Pete Henry from the Hall of Fame. My only regret is that Pete is not here to receive it in person. Pete, in my estimation, is the greatest lineman that ever-played football. I hope that you lineman back there will not be insulted for that statement. I'd just like to mention a few of the things that Pete has done on the football field as you look at your record you'll find that he holds the record for the longest drop kick fifty yards well they missed by three yards because he kicked them fifty-three yards in the game that we had in Toledo. Pete was our specialist on kickoffs. In those days we were allowed to make an artificial T which would be six or eight inches in height and Pete could get under that ball and kick it so high in the air that our team was down there so that they never ran a kickoff back while Pete was doing the kicking.

Pete was also extremely fast, he weighed somewhere between 250 and 300 pounds. He was always rather sensitive of his weight. I remember a game in Philadelphia were a speedy back intercepted a pass on our goal line and although he had eight yards start on Pete, he'd caught him by the time he’d gone to the fifty-yard line. As an offensive tackle it was always a pleasure to call a play through him because there's always an opening for some gain. As a defensive player I remember an instance and I've never seen it equaled before. We were down our goal line when a tackle run or end run was as attempted Pete charged through knocked the end, the tackle, the running guard like ten pins down on the ground and tackled the man for a five-yard loss. In addition to all of this Pete could also carry the ball. We had during our championship years we had I think the best fullback of all time in Doc Elliot, but if we had a fourth and two situation close to our goal line, the strongest play that we had was to give it to Pete to get around tackle and he would get the yards for us. I appreciate the honor of receiving this and once again I am only sorry that Pete is not here to receive it in person, Thank you.