"We played 60 minutes in those days. I don’t think I would have liked to play just half the time as they do today.” 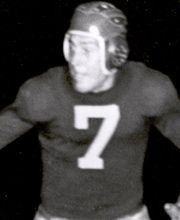 Mel Hein, a fixture at center for the New York Giants for 15 seasons, was one of the most durable players in NFL history. In the early days, there was no platoon football and players went 60 minutes every game. Yet he called for a timeout just once in his career—for hasty repairs to a broken nose in 1941.

Even in his final campaign at the age of 36, Mel was still playing every game from the first kickoff to the final gun. Mel combined great stamina, a cool head, mental alertness and simply superior ability to become an exceptional star.

He was named first-team All-NFL center eight straight years from 1933 through 1940. He also earned second team All-NFL recognition five other times. In 1938, he was named the league's most valuable player, a rare honor for a center. He was the team captain for 10 seasons.

"Cappy" could do everything expected of a center and a linebacker and quite a bit more. Mel was one of the few NFL stars who had the speed and agility to contain Green Bay's premier receiver, Don Hutson, by bottling him up on the sidelines so he could not maneuver into the open. Although Mel was thoroughly aggressive and coldly ferocious when it came to blocking and tackling, he was a gentleman player. He rarely lost his temper.

Hein led Washington State to a Rose Bowl bid in 1930 and was named to Grantland Rice's All-America team. Yet Mel had to write to three NFL teams offering his services in 1931. Providence bit first, offering $135 a game. Hein signed and mailed the Steam Roller contract. Then he learned that he could get $150 from the Giants so he hastily wired the Providence postmaster, described the letter he had sent and asked him to return it. Fortunately for the Giants, the first contract was returned and Hein destroyed it. 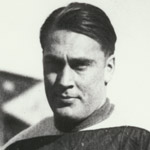 Drafted: Hein played prior to the NFL draft being implemented

It's a high honor and a great privilege for me to be able to present a great American, distinguished athlete, and a wonderful gentleman, Mel Hein. He established an all-time endurance record for lineman which remains indelibly defiant after more than a quarter of a century. Fifteen seasons in the National Football League. He was not a part time specialized employment. Game after game, year after year, he played both offense and defense. At center he had a shared blocking and grinding attack. As a linebacker he was a pioneer in the pass defense patrol. In almost two hundred games Hein required only one time out in 1941 for a concussion and a broken nose, his only injury in twenty-five years of school and pro ball.

In his final season, age thirty-six, he played sixty-minute games. During the reign at center the Giants won seven Eastern and two World Championships. Hein was named eight straight years as all-pro. He didn't have such a permanent job at Washington State College, he was so versatile that he was named on three All-Americans at three different positions - tackle, guard, and center. The immortal Grantland Rice created the position for him, utility lineman. Mel Hein is now coach at Southern California and lives in Pasadena. I'm delighted to present Mel Hein.

Thank you very much Congressman Bow. It's an honor for me to be introduced by you. I want to thank the National Football Hall of Fame and you people here in Canton behind the Hall of Fame for having my wife, Florence, and me back here from Los Angeles. We looked forward to it for quite a while and we're really having a lot of fun here. It's an honor for me to be with this selected group, these gentlemen who have been coming up here. Most of us got in last night and most of us got together for a little while last night to compare notes and talk over old times. I've knocked heads against most of these fellows and you should have heard some of the stories that were told last night, and if any of you people doubt that we’re not great you should have been there. That's the way with football whether you 're high school, college, or professional man, the longer you 're away from the sport the greater you become and it thrills me to death to think how great I'll be when I'm a hundred years old. Now I want to thank my coaches and the players of the New York Football Giants for making this honor possible for me. Thank you very much.